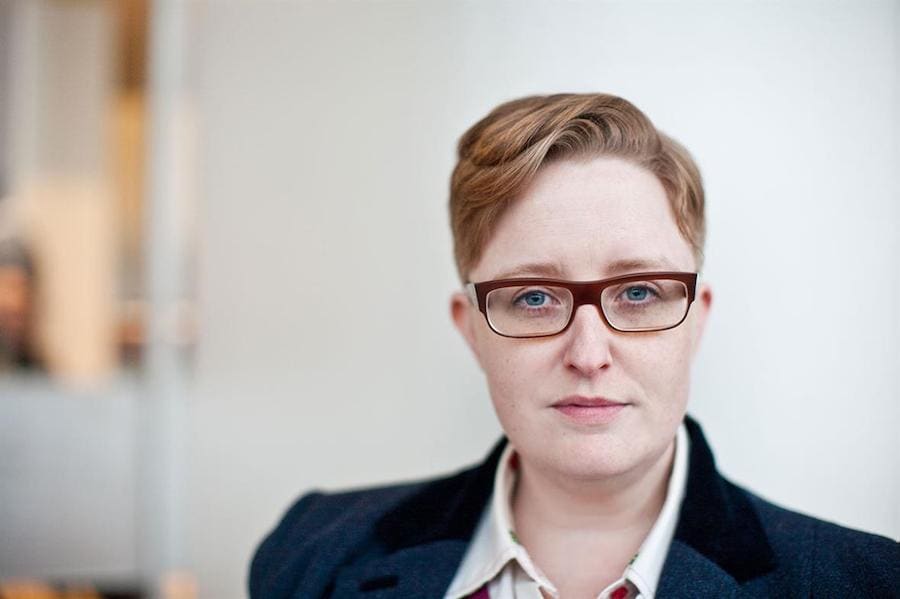 She was educated at Christ the King Primary School in Cardiff, New College in Cardiff which is a former independent school, and King Edward VI Camp Hill School for Girls in Birmingham. She then went on to study English Language and Literature at St Hilda’s College, Oxford.

It was at Oxford where she was able to be more herself: “I found other girls who liked girls, cheap alcohol on tap and the freedom to smoke out of my bedroom window.”

In 2005, she joined Stonewall in the role of Senior Policy Officer where she led work on Stonewall’s research into homophobic bullying in schools. She became Head of Policy and Research in 2007 and Director of Public Affairs in 2009.

During this time Hunt produced research into a number of issues including:

Hunt has overseen the growth of Stonewall’s work in Scotland and Wales, in particular the establishment of the Stonewall Cymru bilingual information service and Stonewall Scotland’s lobbying to secure the Marriage and Civil Partnership (Scotland) Bill. She gave evidence to the Scottish Parliament Equal Opportunities Committee on marriage equality in September 2013.

As Deputy Chief Executive, Hunt was involved in Stonewall’s campaign regarding the Marriage (Same-Sex Couples) Bill in England and Wales.

She was involved in Stonewall’s campaign regarding the Human Fertilisation and Embryology Act 2008, legalising lesbian access to fertility treatment.

In October 2013, in its “Pink List“, The Independent on Sunday named Hunt as the fifth most influential LGBT person in Britain. In 2014, she dropped to eighth place in the renamed “Rainbow List”, and in 2015 she was voted into third place.

She attracted much attention in May 2014 when she announced in The Daily Telegraph that Stonewall would not be joining a wide boycott of The Dorchester hotel in London, owned by the Sultan of Brunei, Hassanal Bolkiah, where Stonewall was to hold a gala dinner. Bolkiah was proposing to introduce the death penalty for sodomy but she argued that there was not “a mandate for the boycott” and “We only implement actions that we can calculate will have an impact.”

She publicly apologised days before the 2015 general election after Stonewall was criticised for publishing an online campaign graphic that suggested that only the Labour Party substantially supported LGBT equality in its manifesto.

In 2019, some donors were reported by The Sunday Times to have stopped funding Stonewall as a consequence of Hunt’s position on trans equality. One donor was reported as saying that Hunt was “no longer a worthy champion of our rights”, another that she had “lost what the big principle is”.

Hunt resigned as CEO of Stonewall in 2019 after a period of controversy over her decision to lobby for transgender rights alongside lesbian, gay and bisexual equality. Stonewall was criticised by some feminist and LGBT+ campaigners who think trans rights can conflict with the rights of people born as women, also known as TERFs. 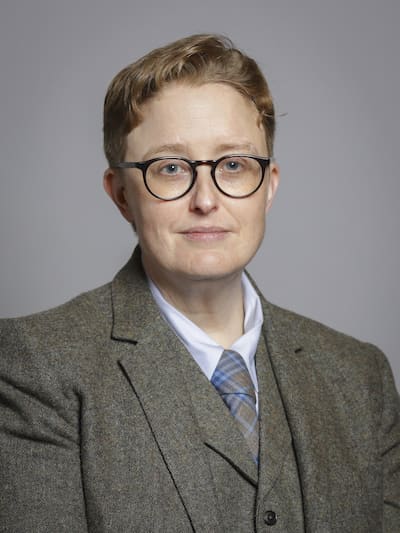 The controversy increased as the British government debated whether or not to make it easier for people to legally change gender.

At the time, some donors didn’t agree with her position or the way she was doing it and started to withdraw their donations, leading her to resign and allow someone else to continue the work. She was accused of running “a militant trans agenda” by one former supporter, and of “losing sight of the bigger picture” by another.

Stonewall was founded 30 years ago to campaign for gay and lesbian rights. It now includes the transgender community – a decision some have criticised. She admits that Stonewall was “late to the game” in including them.

Ruth Hunt told BBC Hardtalk’s Sarah Montague that lesbian, gay, bisexual and transgender people experience prejudice and discrimination in the same way. She said “People who hate us tend not to differentiate – there is a similar amount of prejudice,” she said.

Hunt acknowledged this opposition to her “trans women are women” message when she left, stating: “Recognising the diverse experiences and needs within LGBT communities … has not always been a comfortable conversation for Stonewall to have but it has been a vital one. Expanding our work to ensure we are more closely speaking alongside and sharing power with these communities is a journey we are still on, and one that I am confident will excite a new leader.”

Jan Gooding, Chair of the Board of Trustees, said: ‘Ruth has been a visionary, bold and inspirational leader during her years at Stonewall. We are incredibly grateful for her generous leadership, her unwavering commitment and her unmatched drive. We will all miss her dearly.

‘When Ruth took the reins of the organisation in 2014, Stonewall was a very different place. Over the course of her tenure, she has changed the organisation’s culture, expanded our remit and shown an unequivocal commitment to supporting parts of the LGBT communities that have been traditionally excluded.

‘Specifically, her commitment to integrating trans communities into Stonewall’s work, following a period of extensive consultation, has been and will continue to be integral to our development as an organisation. This is a journey that is fully supported and championed by the entire Board of Trustees.

‘Ruth will leave with the knowledge that she has significantly transformed Stonewall for the better and has provided an exciting opportunity for a strong and forward-thinking leader to step in and take the helm during a new strategic period. I speak on behalf of the entire Board and staff team when I wish Ruth only the best in her next steps.’

Hunt continued in her statement: “The past 14 years have been transformative for me, both personally and professionally. I am incredibly proud of how much we have achieved as an organisation and am honoured that I have been the person to lead this change at Stonewall.

‘I could not be prouder to have led this amazing organisation for the past five years and look forward to seeing it – and all the amazing people that work for it – go from strength to strength in years to come.”

She maintains that she is not leaving because of opposition. It is simply because she has spent her entire career (14 years) at the same organisation and is looking to move on to a new challenge.

Hunt remained unmovable and unapologetic in her decision to include trans rights. She always knew their “Trans Women Are Women. Get Over It” t-shirts would get a wide reaction.

She said “It’s disgusting we hadn’t done this work sooner. Our lack of trans inclusion was utterly baffling – why would we work with 800 employers and tell them everything about how to monitor sexual orientation and not tell them about trans? Why would we train every immigration judge on LGB issues and not tell them about trans? It was preposterous. The aggression shown towards trans people is one micro-step away from aggression shown to butch dykes or camp men. It’s all part of the same hatred.” 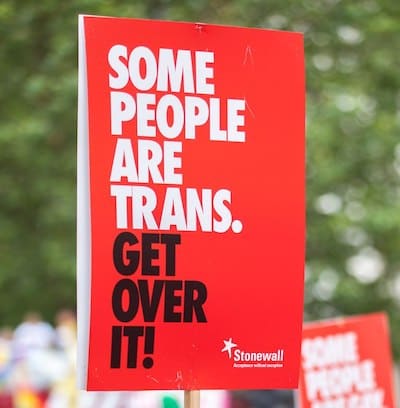 She added to this in a 2020 interview with The Guardian: “Trans women are women, trans men are men and non-binary people are valid. The ease with which we dehumanise them is terrifying. I receive more hateful abuse from people who take issue with this than I’ve ever had from homophobes.

Ruth Hunt rejects the idea that women have to conform to fit in. “It is bollocks that women only succeed if they adhere to a soft idea of femininity. While climbing the ranks at Stonewall I was told that I should become more “feminine”. [So] I cut my hair shorter and bought some beautiful new ties.”

Hunt was nominated for a life peerage and Crossbench member of the House of Lords in the 2019 Prime Minister’s Resignation Honours by Theresa May and granted by The Queen at the request of an outgoing Prime Minister.

She was created Baroness Hunt of Bethnal Green, in the London Borough of Tower Hamlets, on 16 October 2019.

In 2020, she said “Aged only 40 and unequivocally a dyke, finding myself a baroness in the House of Lords is unexpected. It was a big decision to accept, but I see it as my duty. Receiving letters addressed to “Baroness Hunt of Bethnal Green” does tickle me.”

That is the story (so far) on Ruth Hunt – or should I say, Baroness Ruth Hunt of Bethnal Green.