Henry Stokes – or Harry as he was generally known – was born around 1799. He assumed a male identity at a young age and began serving as a bricklayer’s apprentice with Mr Peacock in Bawtry, just outside Doncaster. Bricklaying was a skilled trade and Harry would typically have trained for around seven years.

Whilst working his apprenticeship he began a relationship with a young woman called Ann and the couple married in Sheffield. The young couple moved to Manchester where Harry built up a successful bricklaying firm. Harry, by news reports, was a well respected tradesman and employed eight men and Ann was the bookkeeper.

The area where Harry Stokes and his wife lived was known as District No 13, The Old Quay District. Nowadays this area is known as Spinningfields, Harry’s home on Cumberland Street was where the avenue is today: Harry Stokes and His Wife Ann

In 1838 after 22 years of marriage Ann Stokes approached a Manchester magistrate about getting a formal separation from her husband Harry. She couldn’t cope with Harry’s drunken rages and withholding of the housekeeping. She wanted advice on the matter because, as she told the magistrate, Harry was ‘not a man but a woman’.

The shocked magistrate approached the police and Harry was made to undress in front of a police surgeon who issued a certificate declaring that Harry was a woman. ‘Transgender’ was unheard of as a concept in the Victorian era (the term didn’t in fact come into usage until 1971). Mr Thomas, Deputy Constable of Manchester mediated between Ann and Harry, and Ann kept the house and belongings. There was no talk of any immoral or criminal behaviour having occurred between Ann and Harry – women were at the time seen as passive, non-sexual beings.

Not a Man, But A Woman

Harry became the talk of the town, a figure of ridicule. Ballad sellers composed songs about him which were sung in taverns and on street corners. News reports used female pronouns to talk about Harry and remarked how plucky it was for a woman to have raised her game, overcoming feminine weaknesses to act like a man. They warned that now the secret of Harrys ‘disguise’ was out in the open, he’d have to start dressing as a woman or else leave town to set up business elsewhere.

Harry then began a relationship with the local barmaid Francis Collins. They lived in Salford for a couple of years before moving to Quay Street to run a beer house. Francis’s son John, from a previous marriage, later spoke of how he had always regarded Harry as his step-father.

On 15th October 1859 a body was found in the River Irwell at Mode Wheel, bolt upright in the water with a top hat still jammed firmly on his head. The corpse was taken to the Swann Inn, Pendlebury where an inquest was held. A juror recognised the body as that of Harry Stokes, advising that he was “not a man but a woman”. Harry’s body was inspected by two women who confirmed it was that of a woman.

The inquest into Harry’s death was reported in the local press, with headlines such as ‘A WOMAN PASSING AS A MAN FOR FORTY YEARS’ – the Manchester Examiner; and ‘HARRY STOKES THE MAN WOMAN’ – The Salford weekly News. The stories were reprinted in papers across the country. 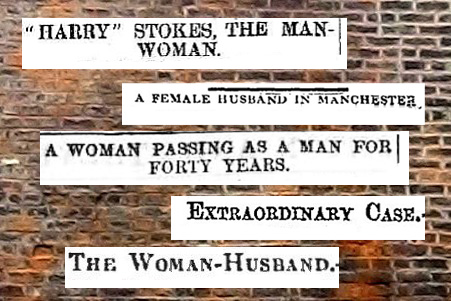 The inquest verdict was ‘Found drowned – supposed suicide’. Harry’s death was entered in the General Registry Office under the name Harriett Stokes.

In 2016 as part of the National Festival of LGBT, a play was performed in Manchester about the fascinating life story of Harry Stokes and reclaims a forgotten trans pioneer, challenging modern perceptions about LGBT individuals in the Victorian era. We’ll never truly know what happened to Harry Stokes but the fact that he was brave enough to be his true self in a time that was less accepting of people’s differences is extraordinary. His memory will live on in the history of Manchester and trans history.