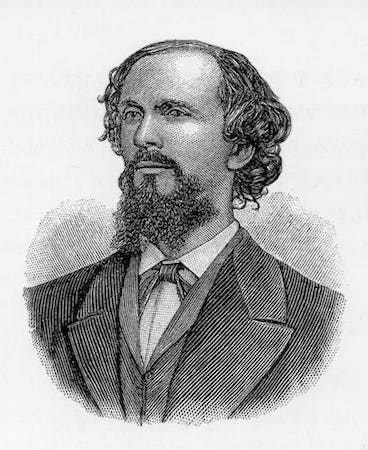 Karl Heinrich Ulrichs was born in the East Frisian village Westerfeld, incorporated today within Aurich, which at the time was in the Kingdom of Hanover on the 28th August 1825. Ulrichs recalled that as a youngster he felt different from other boys and was attracted by the bright colors of military uniforms and women’s clothing. Ulrichs gravitated towards activities and clothing that were deemed feminine by his culture; this gravitation would later inform how he discussed queerness and how it existed within men specifically.

Unfortunately, Ulrichs first sexual experience with a man happened when he was just fourteen years old and he was sexually abused by a riding instructor, something that would remain with him throughout his life. But that experience was the catalyst towards him fighting to separate queerness from paedophilia because at the time the two were viewed as nearly identical.

He graduated in law and theology from Göttingen University in 1846 and from 1849 to 1857 he worked as an official administrative lawyer for the district court of Hildesheim in Kingdom of Hanover. Ulrichs worked to be self-aware, interrogating his identity and his attraction to men in ways that were not common for the time period. It was in 1857 that this self-awareness led to his dismissal from his job.

His Exploration of Queerness & Being a ‘Urning’.

But this setback did not hinder his growth and as he became more comfortable with this identity, he also became more vocal about it. So vocal that he even told his family that he was, what he called a “Urning” a word he coined himself to describe men who were attracted to other men. 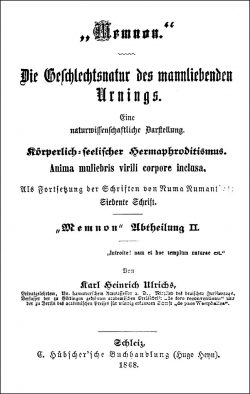 This word, in fact, was one of his first leaps in changing the discussion around queerness. He then wrote a series of essays published under the pseudonym ‘Numa Numantius’. By creating a new word, he removed the separation between the act and the person. Scholar Hubert Kennedy wrote about this, saying: “Ulrichs’ goal was to free people like himself from the legal, religious, and social condemnation of homosexual acts as unnatural. For this, he invented new terminology that would refer to the nature of the individual, and not to the acts performed.”

Though “Urning” would not catch on as he hoped, it is now considered one of the earliest words to describe queerness in the way he was attempting to, coming before words like gay or homosexual. The word homosexual came soon after, still within Ulrichs’ lifetime though he actively chose not to use that word as he resented that “sexual” was part of the word at all. He worked to expand the understanding of queerness to be seen beyond the sexual acts.

Karl Heinrich Ulrichs continued his writing, he found himself coming to the conclusion that love between to men was natural, and it was something that people were born with. He described as men being born with a “germ” that made them internally feminine. Now obviously this is probably not the best description of homosexuality in today’s language. But let’s remember this was in the 1800s so for the time, this was revolutionary thinking.

This was the base for an argument in favour of fair treatment of queer identities, an argument that is still growing and shifting today.

His Activism For Queerness. 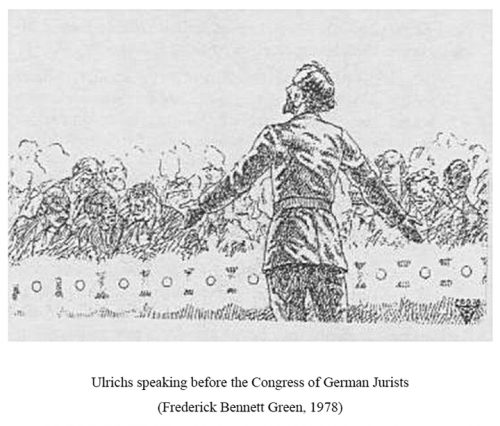 He soon began publishing under his real name (possibly the first public “coming out” in modern society) and wrote a statement of legal and moral support for a man arrested for homosexual offences. He was also a man who, on the 29th August 1867, became the first queer person to speak publicly in defense of queerness. He did this by pleading with the Congress of German Jurists, urging them to repeal anti-homosexual laws. And while he was shouted down, this act was not fruitless. It was a speech that was shouted down but never forgotten because it was for most people there the first time they heard queerness discussed in a positive way. And his continued advocacy work went on to inform people for generations after him, including Magnus Hirschfeld.

In the 1860s, Ulrichs moved around Germany, always writing and publishing, and always in trouble with the law — though always for his words rather than for sexual offences. In 1864, his books were confiscated and banned by police in Saxony. Later the same thing happened in Berlin, and his works were banned throughout Prussia. Some of these papers were found in the Prussian state archives and were published in 2004. Already several of Ulrichs’s more important works are back in print, both in German and in translation.

Karl Heinrich Ulrichs was a patriotic Hanoverian, and when Prussia annexed Hannover in 1866 he was briefly imprisoned for opposing Prussian rule. The next year he left Hannover for good and moved to Munich, where he addressed the Association of German Jurists on the need to reform German laws against homosexuality.

In 1879, Ulrichs published the twelfth and final book of his Research on the Riddle of Man-Manly Love. In poor health, and feeling he had done all he could in Germany, he went into self-imposed exile in Italy. For several years he travelled around the country before settling in L’Aquila, where his health started to improve. He continued to write prolifically and publish his works (in German and Latin) at his own expense. In 1895, he received an honorary diploma from the University of Naples.

Sadly though, in 1895 he died in L’Aquila, aged 69. His gravestone is marked (in Latin), “Exile and Pauper.” “Pauper” may have been a bit of a romantic licence. Karl Heinrich Ulrichs lived in L’Aquila as the guest of a local landowner, Marquis Niccolò Persichetti, who gave the eulogy at his funeral. 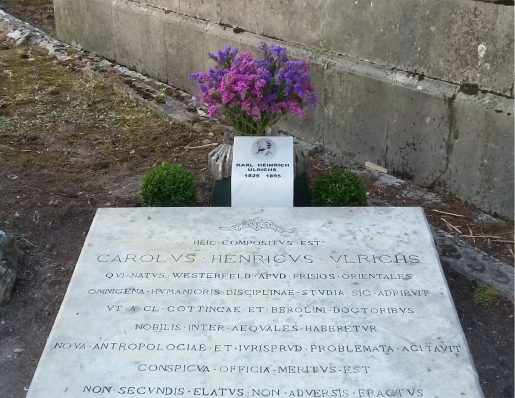 Before he died he said this “Until my dying day I will look back with pride that I found the courage to come face to face in battle against the spectre which for time immemorial has been injecting poison into me and into men of my nature. Many have been driven to suicide because all their happiness in life was tainted. Indeed, I am proud that I found the courage to deal the initial blow to the hydra of public contempt.” 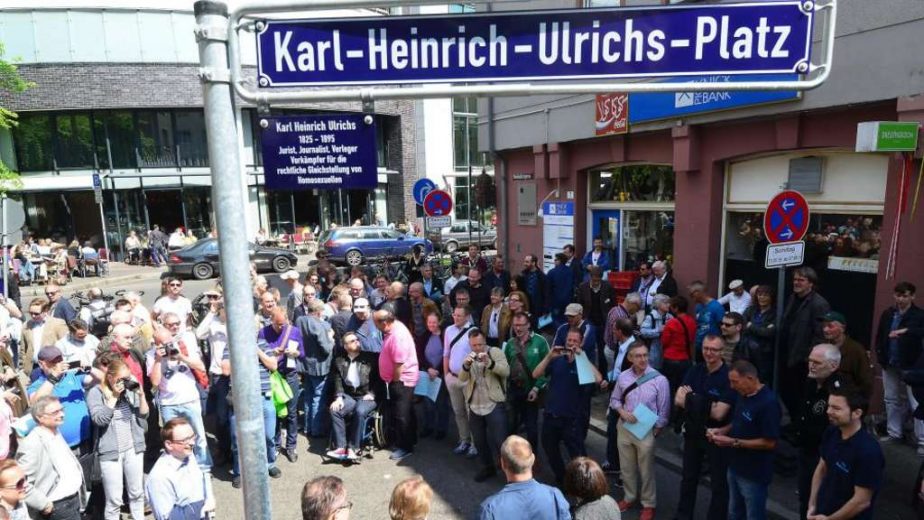 Forgotten for many years, Karl Heinrich Ulrichs later became something of a cult figure in Europe in the late 1980s. There are streets named for him in Munich, Bremen, Hanover, and Berlin. His birthday is marked each year by a lively street party and poetry reading at Karl-Heinrich-Ulrichs-Platz in Munich.

The city of L’Aquila has restored his grave and hosts the annual pilgrimage to the cemetery. Later gay rights advocates were aware of their debt to Ulrichs. Magnus Hirschfeld thoroughly referenced Ulrichs in his 1914 publication The Homosexuality of Men and Women (which also played a part in Lili Elbe’s transition). Volkmar Sigusch called Ulrichs the “first gay man in world history.”

In Ulrichs’ memory, the International Lesbian and Gay Law Association presents a Karl Heinrich Ulrichs Award for distinguished contributions to the advancement of sexual equality.

My sources for this story were Making Queer History as well as Wiki.

You can find out more about Karl Heinrich Ulrichs on our podcast: