I want to start this off by saying that this post is in no-way aimed at the NHS. As someone who has benefitted from the NHS being free, myself and my family could not be more appreciative or supportive of them. I am in no way being critical of them or any of the services they provide. They do incredible work 365 days a year and they are under immense pressure and putting their lives at risk amidst the Coronavirus pandemic and we cannot ask anymore of them. All Gay Long whole-heartedly supports the NHS and everything they stand for.

This is a controversial topic, but it is a conversation that is happening in the UK right now, especially within the LGBTQ+ community and it is something we need to speak about.

Ok, I’m going to say a thing…Children drawing rainbows and putting them in windows = Cute and sweet.
The Tory government STEALING Pride flags and washing over them with pro-NHS rhetoric is fucking appalling. Do you know how hard LGBTQ+ people fought for those pride NHS badges!?

Support for the NHS

Across the country, households are standing on their doorsteps once a week and clapping to show their support and appreciation for the NHS and other key workers. Kids are drawing rainbows and parents are showing them off proudly (and rightly so) in their windows.

the pride flag has an important meaning and history to lgbt

the nhs deserve their own symbol which has its own meaning rather than taking the lgbt flag as their own.

Others have taken to using rainbow flags to show their support, and we’re not talking flags with images of rainbows on them – they are literally using Pride flags. This is puzzling for some and doesn’t make much sense.

Not to get political or anything but in the UK we have the rainbow to support the nhs and just recently they’ve said that “They’re going to use the rainbow FLAG as a way to honor them.” now excuse me but im pretty sure the pride flag belongs to the lgbt community. Not the nhs 1/?

No other symbol would be borrowed or used for 2 different purposes or meanings. Doing so is like saying “oh, that thing doesn’t matter and it belongs to anyone so we’ll just use it for this now”. This would not happen with any other logo or symbol, so why is it ok to do this with the Pride flag.

Companies changing their pride products into NHS rainbow products… proof that they never cared about lgbt+ issues, they just cared about what was trending. https://t.co/Ax3tCkqTcR

Let me be clear, the issue here isn’t children drawing rainbow images, the issue is (even homophobic) individuals, companies and the government itself literally thinking it is ok to use the LGBT rainbow flag for the NHS instead.

As nice as it is to see the pride flag everywhere, it’s deeply offensive that homophobic people and Tories are flying the pride flag and calling it the NHS flag. People have died for that flag and still due to fight for what it stands for. And yes, people die for the NHS…

Online shops have been accused of ignorance as they sell LGBT+ pride banners rebranded as “Thank You NHS” flags. This is just one example of the systematic erasure and rebranding of LGBT+ symbology that we have been experiencing for decades.

My grandad who is a staunch “I’ve got nothing against them, but I don’t want to know about it” has put this up out front and refuses to accept it’s an LGBT pride flag pic.twitter.com/SAzKWgCbls

Plymouth Citybus even rebranded what is usually their Pride bus and changed it’s meaning to the NHS instead.

🌈 Rainbows have become synonymous with hope and the NHS during the current pandemic, so we thought what better way to show our thanks to our amazing NHS and key workers, than to re-brand our Pride bus to our rainbow ‘NHS’ bus? 🌈
Look out for the bus on our roads soon! pic.twitter.com/yqq6OLNjq2

When people ask us every year “why do you even need Pride” or make comments like “we don’t get straight pride”. This is why. In short, leave the Pride flag alone and stop trying to erase our history.

Why is it that when we use the flag during Pride month we are accused of “throwing it in people’s faces”, yet somehow this is ok?

The following is taken from a recent article by Forbes:

One study into the impact of coronavirus on the LGBT+ community by Queer Voices Heard suggests just under six in 10 (57%) in the U.K. LGBT Community fears they will be worse off after the pandemic.

Early signs suggest there is already evidence that might be the case.

The thing that is so puzzling in all of this is that the NHS already have their own symbol. They have a logo and iconic blue and white colours. Would it not make more sense to use a blue and white flag instead or use images of the actual NHS logo?

But that should mean they deserve their own flag. The NHS is something to be proud of and it needs a symbol. But using the LGBT pride flag erases the work of the LGBT community and is being used by right wing individuals to erase our existence. Homophobes should not fly our flag. pic.twitter.com/1NfYcWqps8

Many even fear that next year when we are able to hold physical Pride celebrations again, right wing people are going to complain that we are using the “NHS symbol” – despite the fact that the Pride flag has been used by us for more than 40 years. 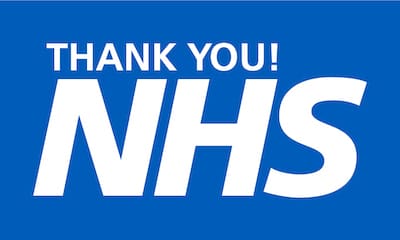 The current situation means uncertainty for almost everyone, and these are unprecedented circumstances for millions of people. Many LGBTQ+ people are worried about their future and what recent statements and changes will mean for them.

The Pride flag does represent a hard-fought battle for basic human rights and its reinvention as a ‘Thank You NHS Flag’ is disrespectful and at best, contentious for some in the LGBTQ+ community.

Nikki
Hi I'm Nikki and I love writing about all things LGBTQ+ and finding out new and interesting facts. I believe it's important to educate ourselves about our history and remember who came before us. I work in SEO and love listening to music and collecting vinyl.

Latest posts by Nikki (see all)