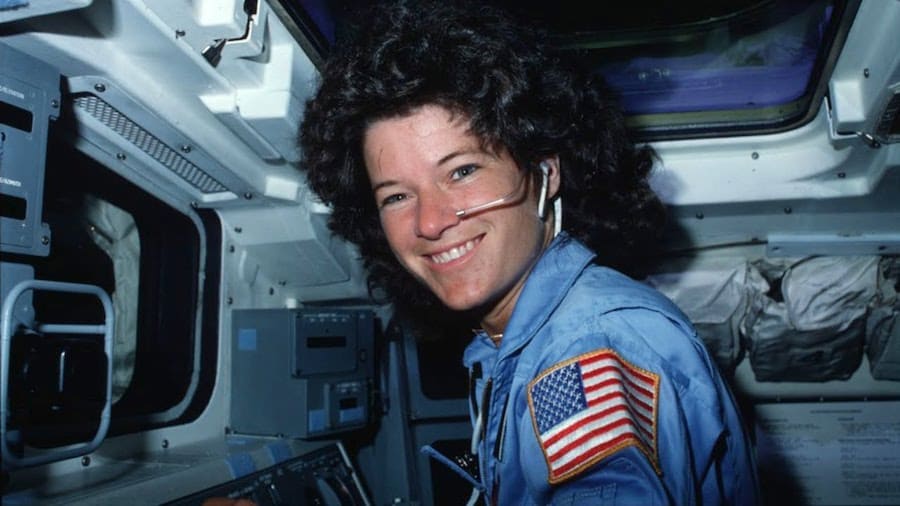 Born on 26th May 1951 in Enico, Los Angeles as the eldest child of Dale Burdell Ride and Carol Joyce Ride, Sally Ride had one younger sibling, Karen “Bear” Ride. Ride attended Portola Junior High (now Portola Middle School) and then Birmingham High School, before graduating from the private Westlake School for Girls in Los Angeles on a scholarship.

Who is Sally Ride?

In addition to being interested in science, she was a nationally ranked tennis player. It is here that she would meet her childhood friend and future “secret” partner Tam O’Shaughnessy.

Ride attended Swarthmore College for three semesters, took physics courses at the University of California, LA, and then entered Stanford University as a junior, graduating with a bachelor’s degree in English and physics.

At Stanford, she earned a master’s degree in 1975 and a PhD in physics in 1978 while she was doing research on the interaction of X-rays with the interstellar medium. Astrophysics and free-electron lasers were her specific areas of study.

Ride was selected to be an astronaut as part of NASA Astronaut Group 8, in 1978. 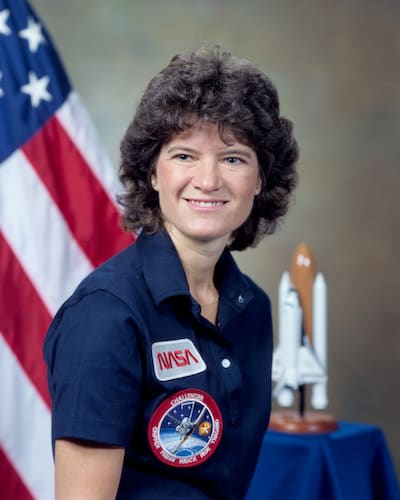 The class was the first to include female and non-white astronauts; of the 35 selected, six were women, three were African American, and one was Asian American.

She applied after seeing an advertisement in the Stanford student newspaper and was one of only 35 people selected out of the 8000 applications.

After graduating from training in 1979, becoming eligible to work as a mission specialist she served as the ground-based capsule communicator (CapCom) for the second and third Space Shuttle flights and helped develop the Space Shuttle’s “Canadarm” robotic arm.

Prior to her first space flight, she was subject to media attention due to her gender. During a press conference, she was asked questions such as, “Will the flight affect your reproductive organs?” and “Do you weep when things go wrong on the job?” Despite this and the historical significance of the mission, Ride insisted that she saw herself in only one way — as an astronaut.

In 1982, she married fellow NASA astronaut Steve Hawley but (thankfully) they divorced in 1987.

On 18th June 1983, she became the first American woman in space as a crew member on Space Shuttle Challenger for STS-7. Many of the people attending the launch wore T-shirts bearing the words “Ride, Sally, Ride!’.

The purpose of the mission was to deploy two communications satellites and the first Shuttle Pallet Satellite (SPAS-1). They also intended to conduct experiments within the cargo bay, and test the TDRS satellite. SPAS-1 was successfully deployed, underwent experiments, then recollected and brought back to Earth. Part of Ride’s job was to operate the robotics arm to deploy and retrieve SPAS-1.

Her second space flight was STS-41-G in 1984, which was the 13th flight of NASA’s Space Shuttle program and the sixth flight of Space Shuttle Challenger, and conducted the second shuttle landing at Kennedy Space Center on 13 October.

She spent a total of more than 343 hours in space.

Ride had completed eight months of training for her third flight (STS-61-M, a TDRS deployment mission) when the Space Shuttle Challenger disaster occurred.

In 1987, Ride left her position in Washington, D.C., to work at the Stanford University Center for International Security and Arms Control. In 1989, she became a professor of physics at the University of California, San Diego, and director of the California Space Institute.

From the mid-1990s, Ride led two public-outreach programs for NASA—the ISS EarthKAM and GRAIL MoonKAM projects, in cooperation with NASA’s Jet Propulsion Laboratory and UCSD. The programs allowed middle school students to request images of the Earth and Moon.

They were all about creating entertaining science programs and publications for upper elementary and middle school students, with a particular focus on girls.

According to Roger Boisjoly, who was the engineer that warned of the technical problems that led to the Challenger disaster, Ride was the only public figure to show support for him when he went public with his pre-disaster warnings. Sally Ride hugged him publicly to show her support for his efforts.

Ride endorsed Barack Obama for U.S. President in 2008. She was a member of the Review of United States Human Space-Flight Plans Committee, an independent review requested by the Office of Science and Technology Policy (OSTP) on 7th May 2009.

Rewards and Accolades Time! Are you ready?

Ride received numerous awards throughout her lifetime and after. She received:

Two elementary schools in the United States are named after her:

On 6th December 2006, California Governor Arnold Schwarzenegger and First Lady Maria Shriver inducted Ride into the California Hall of Fame at the California Museum for History, Women, and the Arts.

In 2007, she was inducted into the National Aviation Hall of Fame in Dayton, Ohio.

Unfortunately, Ride died on 23rd July 2012, at the age of 61, in her home in La Jolla, California, seventeen months after being diagnosed with pancreatic cancer. Which she was very secretive about especially her treatments etc. Following cremation, her ashes were interred next to her father at Woodlawn Memorial Cemetery, Santa Monica.

But back to some more amazing accolades, she got after her death

Ride directed public outreach and educational programs for NASA’s GRAIL mission, which sent twin satellites to map the moon’s gravity. On 17th December 2012, the two GRAIL probes, Ebb and Flow, were directed to complete their mission by crashing on an unnamed lunar mountain near the crater Goldschmidt. NASA announced that it was naming the landing site in honour of Sally Ride.

In April 2013, the U.S. Navy announced that a research ship would be named in honour of Ride. This was done in 2014 with the christening of the oceanographic research vessel RV Sally Ride.

On 20th May 2013, a “National Tribute to Sally Ride” was held at the John F. Kennedy Center for the Performing Arts in Washington, D.C. and on that same day, President Barack Obama announced that Ride would receive the Presidential Medal of Freedom, the highest civilian award in the United States. The medal was presented to her life partner Tam O’Shaughnessy in a ceremony at the White House on 20th November 2013.

In July 2013, Flying Magazine ranked Ride at number 50 on their list of the “51 Heroes of Aviation”.

In 2014, Ride was inducted into the Legacy Walk, an outdoor public display that celebrates LGBT history and people. 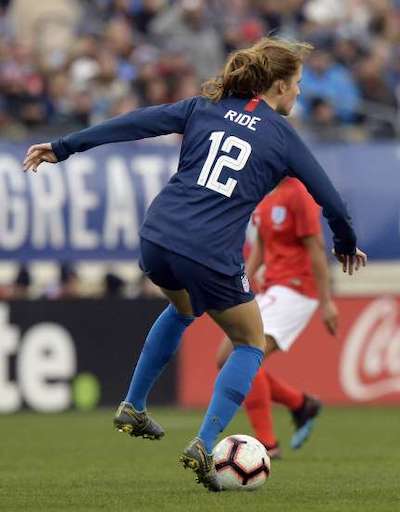 In 2017, a Google Doodle honoured her on International Women’s Day.

For their first match of March 2019, the women of the United States women’s national soccer team each wore a jersey with the name of a woman they were honoring on the back; Tierna Davidson chose the name of Sally Ride.

An Amazing Life with the Woman she Loved

She was an amazing woman who spent 27 years until her death with the woman she loved.

Even though she kept her love life somewhat hidden away from the public, the company she shared with Tam knew and so did her sister who said Tam “was just always part of our family”.

So that is the life story of Sally Ride!