It’s important to know and remember the events and people that helped shape the history of the LGBTQ+ community and paved the way for others. It took a lot of campaigning and a lot of hardship, but each of them are equally important as we continue to strive for equality.

It would be impossible to cover every event, but here we’ve picked out some of the more significant ones. 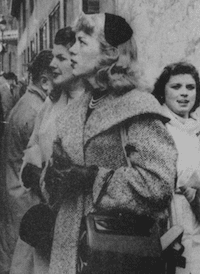 Roberta Cowell become the first British woman that we know of to undergo gender reassignment surgery.   Having originally been born in Croydon and studying engineering at University College London, Cowell went on to become a racing driver and eventually a WWII fighter pilot.

She underwent a procedure that allowed her to get a certificate stating that she was intersex. On the back of this, she was then able to undergo reassignment surgery and get a new birth certificate.

She later explained that being intersex “justified” her transition as it focused specifically on chromosomes and genetics.

He did this only 18 months after being given the choice between spending two years in prison or sterilisation on the form of libido-reducing hormone treatment as a punishment for homosexuality.

The Sexual Offences Act of 1967 decriminalised sex between two men as long as they were both over 21 and did so “in private”.

This act covered England and Wales but did not extend to the Navy, Armed Forces, Scotland, Northern Ireland, the Channel Islands, or the Isle of Man, where sex between two men remained illegal.

A series of demonstrations occurred in retaliation to police raids on gay bars. Members of the LGBTQ+ community fought back against police raids on the Stonewall Inn in Manhattan, New York, USA.

It is reported that the police attempted to make a series of arrests but patrons of the bar fought back. This was the start of what we now know as the modern LGBT movement and Pride marches in the US and around the world.

The first Pride March in the UK is held in London, and attracts approximately 2000 participants. 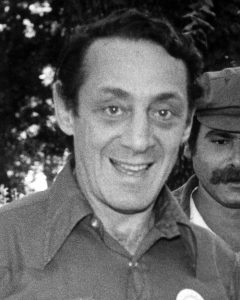 This is in stark contrast to the modern London Pride events that attract up to a million people, and Manchester Pride increases in popularity every year.

PFLAG is an American organisation aimed at uniting parents, families and allies, with people who identify as lesbian, gay, bisexual, transgender, and queer. It was co-founded by Jeanne Manford.

Harvey Milk is elected as city-county supervisor in San Francisco, USA. By doing so he becomes the first openly gay or lesbian candidate that is elected into political office in California.

He is the seventh openly gay or lesbian elected official nationally and only the third man to be openly gay at the time of his election.

He was assassinated the following year.

The European Court of Human Rights in the case of Dudgeon v United Kingdom strikes down Northern Ireland’s decriminalisation of homosexual acts between consenting adults.

This led to them decriminalising homosexual sex in 1982.

After the passing of Terry Higgins in St Thomas’ Hospital in London as a result of AIDS, his partner Rupert Whittaker, Martin Butler and his friends set up the Terrence Higgins Trust – the UK’s first AIDS charity.

To this day, the charity continues to campaign and provide services related to HIV and sexual health.

British Prime Minister at the time, Margaret Thatcher, passes Section 28 of the Local Government Act of 1988.

The act was not repealed in England, Wales and Northern Ireland until 2003.

The World Health Organisation is an agency of the United Nations and in 1990 they declassified same-sex attraction as a mental illness.

This proved to be a significant moment in LGBTQ history for all members of the community from around the world.

The Queen frontman died in his home in November of this year just hours after releasing a statement to the public confirming that he was HIV positive.

Despite becoming one of the biggest stars in the 1970s and 80s (and to this day), Mercury came under intense pressure and scrutiny from many homophobic elements of the press during the later years of his life, as a result of his lifestyle. His sexual encounters and preferences were often the topic of discussion.

Before the introduction of the Don’t Ask, Don’t Tell policy, gay men, lesbians, and bisexuals were banned from serving in the US military.

This policy meant that the military could not ask their service members about their sexual orientation. However, many were still expelled from the military if they engaged in ‘sexual conduct’ with a member of the same sex, stated that they are lesbian, gay, or bisexual, and / or married or attempted to marry a person of the same sex. 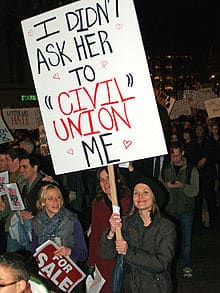 The Civil Partnership Act passed in the UK, granting civil partnerships to couples. This meant same-sex couples could be given the same rights as married heterosexual couples.

This same year, the Gender Recognition Act passed in the UK which gave trans people full legal recognition in their appropriate gender.

The following year in 2005 it became legal for same-sex couples to adopt in England and Wales.

The Russian Gay Propaganda Law or the law for the “Purpose of Protecting Children from Information Advocating for a Denial of Traditional Family Values” was signed into law by President Vladimir Putin.

The Russian government claims that the purpose of the law is to protect children from being exposed to homosexuality under the argument that it contradicts traditional family values.

LGBTQ+ people in Russia continue to experience discrimination, abuse and hardship as a result of this “anti-gay law”, as it is known by many.

The Marriage Act (or the Same-Sex Couples Act) came into effect in the UK allowing same-sex couples to marry.

The USA followed suit and made same-sex marriage legal in 2015.

Transgender health issues are longer classified as mental and behavioural disorders under big changes to the World Health Organisation’s global manual of diagnoses.

It would be impossible to cover everything, but we hope you enjoyed learning more about these key moments in LGBTQ+ history.

Let us know if there’s any other events in LGBTQ+ history you think should be included.