Alan Turing was an English mathematician and was a pioneer of theoretical computer science and artificial intelligence. During WW2, he was instrumental in breaking the German Enigma code, leading to Allied victory over Nazi Germany.

The Enigma machine is an encryption device developed and used in the early-to-mid-20th century to protect communication. It was employed mainly by Nazi Germany during World War II, in all branches of the German military.

The Enigma has an electromechanical rotor mechanism that scrambles the 26 letters of the alphabet. It works when one person enters text on the Enigma’s keyboard and another person writes down which of 26 lights above the keyboard lights up at each key press.

The Enigma encryption proved vulnerable to cryptanalytic attacks by Germany’s adversaries, at first Polish and French intelligence and, later, a massive effort mounted by the United Kingdom at Bletchley Park. While Germany introduced a series of improvements to Enigma, and these hampered decryption efforts to varying degrees, they did not ultimately prevent Britain and its allies from exploiting Enigma-encoded messages as a major source of intelligence during the war.

So How is Alan Turing Involved?

In 1939, Turing was asked to join the Government Codes and Cypher School, a British code-breaking organisation, which was moved to Bletchley Park when war was declared on 3 September.

Turing’s most notable achievement at Bletchley was cracking the ‘Enigma’ code. Together with fellow code-breaker Gordon Welchman, Turing developed the ‘Bombe’, a machine based on an earlier Polish design, which from late 1940 was decoding all messages sent by the Enigma machines.

Then, Turing turned his attentions to the more complex German naval signals, and together with his ‘Hut 8’ team at Bletchley, succeeded in decrypting these as well in 1941, contributing to Allied victory in the Battle of the Atlantic.

In July 1942, Turing developed a complex code-breaking technique he named ‘Turingery’ for use against the Lorenz cipher messages produced by the Germans’ new ‘Geheimschreiber’(secret writer) machine.

Turing also developed a secure speech system, which he named ‘Delilah’. The system, which encoded and decoded voice communications, was intended to be used in a similar way to a telephone scrambler. He demonstrated its mechanisms on one of Churchill’s speeches, but the machine was never commissioned for use in the war effort.

Turing’s homosexuality was barely heard of in mid-20th-century England and a big taboo at the time. His first love was for another pupil at Sherborne School, Christopher Morcom, whose sudden and tragic death from brucellosis left Turing utterly heartbroken and bereft. This affected him for the rest of his life.

After school Turing went to King’s College Cambridge, which during the 1930s was still a centre of the Bloomsbury Group. J.M.Keynes, Virginia Woolf, and E.M Forster had led the way for Bloomsbury with their emphasis on humanity, sincerity, authenticity, and a direct approach to intellectual problems, so very different ideologies from what the Victorian era believed. They had also created perhaps the most gay-friendly environment the country had ever seen. Turing flourished in this new environment, where his own sexuality was simply accepted without fuss or protest.

By the middle of the Second World War, he got engaged to a woman. He was open with his fiancée about his homosexuality. Which didn’t stop her love for him, but Turing eventually ended the relationship later on despite her acceptance. 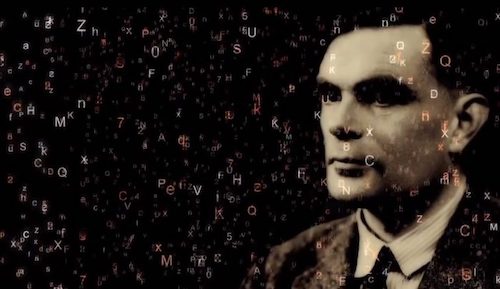 After the war, Turing moved to the University of Manchester, where he started working in the new computer science department. At the same time he was personally preoccupied with finding new ways to deal with his homosexuality in a new city. He grew in confidence because of the increasingly permissive attitudes in society that had been bred by wartime conditions, and soon found himself seeking quick sexual acts with men he met on the streets of Manchester – something that, given the nature of Turing’s work, the government took to be dangerously naive.

At the time of Cold-War Britain, British intelligence was closely linked with the American CIA, at a time when US society was undergoing the paranoia and suspicion of McCarthyism. It was believed at the time that to be a homosexual was a security risk. Churchill’s civil service was keen to screen out such threats.

He was prosecuted and found guilty of homosexual offences. In letters and conversations, Turing seemed to just make light of the conviction and the grim choice he was confronted with by the judge, which was either, prison or “chemical castration” (oestrogen treatment). Turing opted for the castration, and was on oestrogen treatment for the remainder of his life. As a result of his charges he also lost his security clearance, and was officially regarded as a security risk by MI5; this made it completely impossible for him to continue his work on codes.

On June 7 1954, Turing was found and confirmed dead in his bed. When he was found, there was an apple on his bedside table doused in cyanide, which he had taken one bite out of. It is said that he may have committed suicide in despair at the way he had been persecuted for his homosexuality or that he may have been having mood-swings which was known to be one of the side effects of the oestrogen treatment that he was taking. Both of these are just theories as he did not leave a note or an explanation as to the real reason why he committed suicide.

His LGBTQ+ Story is Important

Alan Turing’s story isn’t only important to mathematical history and for his contributions to the war effort. It is also a great example of how LGBTQ+ people,  despite having made important contributions to society, continue to experience discrimination. Prejudice towards us throughout history has often robbed us of a fulfilling personal life, but also of being recognised properly for our historical achievements simply because of our sexuality.

Recently Turing has been named the new face on the £50 note. Which has been welcomed massively by parts of the LGBT+ community as a symbol of a country facing up to the way gay men were persecuted.

Prominent gay rights spokesman Peter Tatchell said Turing’s treatment was symbolic of a “witch hunt” of gay and bisexual men, which led to 1,000 being imprisoned at any one time during the 1950s. He was among those who have welcomed Turing’s appearance on banknotes from 2021.

“It’s a real milestone that signifies the degree of acceptance of LGBT people at the highest level of our society, Alan Turing is not only an icon for the LGBT community, he is an iconic figure for the whole of British society.”

Turing was granted a pardon in 2013 and after a long campaign, the same pardon was extended to all men in 2016 who had been convicted of homosexual offences.

Although this was a big milestone for the LGBTQ+ community. For some campaigners, nothing can appease the persecution of gay and bisexual men in the UK until 1967. The Manchester-based LGBT Foundation was formed in 1975 to help men come out after being gay was decriminalised.

We need to continue to recognise people like Turing to ensure that the legacy of people is not forgotten, especially when they have made such significant contributions to our society and everyday life.

Hi! I'm Shannon, I love to research different LGBTQ+ Facts and love writing about my findings and my opinions and hopefully help someone needing advice. I'm also passionate about animals and currently studying Animal Management.

One Reply to “Why is Alan Turing Important to the LGBTQ+ Community?”