We often hear that there’s no need to fight for LGBT rights or LGBT equality anymore, well here we hope to provide some insights and education into why this is simply untrue. We are still massively underserved, despite there being more of us than ever.

Sexual Orientation in the UK

From this, around 2.0% of people identified as lesbian, gay or bisexual. See more in the following table:

Perhaps unsurprisingly, to some, older generations saw higher numbers of those who identify as heterosexual or straight. Only 6.7% of men and 7.4% of women who identified as LGB were aged 65 years and over.

The reason for this may be that younger people could be more likely to explore their sexuality combined with generally experiencing more social acceptability of sexual and gender identities and the ability to express these openly.

The following chart shows the percentage of people across the UK who identify as lesbian, gay, or bisexual.

When we explore this regionally, in 2018 we see that people in London (2.8%) are more likely to identify as lesbian, gay or bisexual than in other areas. This higher proportion in London can be explained by the younger age structure and the diversity of the population as well as general societal acceptance in these age groups, as mentioned earlier. 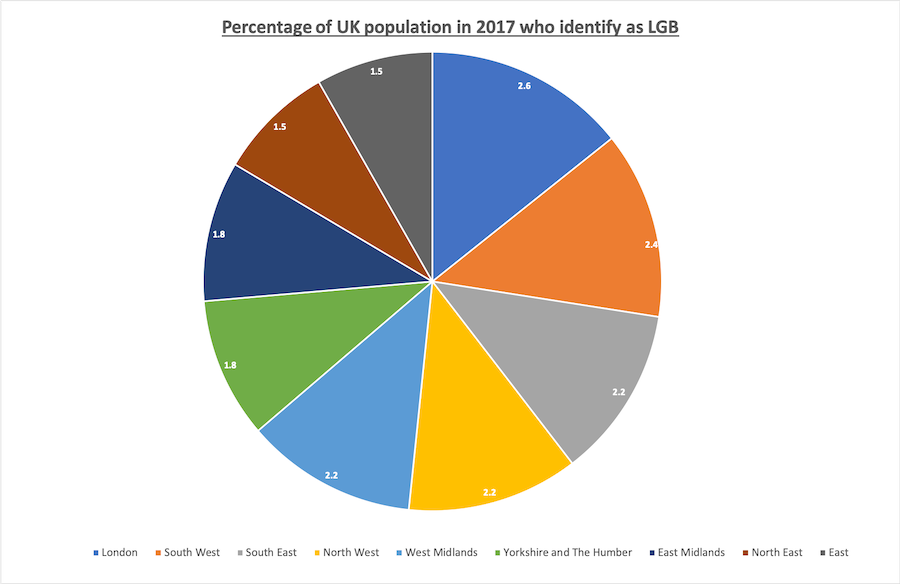 What Does This Mean?

From this, we can see that despite recent growths, the LGBTQ+ community in the UK – and undoubtedly throughout the world, remains vastly under-represented.

There is still a large percentage of people who are unwilling to disclose their sexual orientation, and while they are fully within their rights to do so, the question must be asked why this is. Is it simply that they are not yet ready? Or is it down to circumstances in their local area, family pressure, or religion? It could be any of these reasons, or it could be none of them.

This data also shows us the differences in orientation between the different generations and the disparity in where people live in the UK too.

All of this boils down to why All Gay Long exists: To create more visibility and provide a resource to make everyone feel more comfortable in their own sexual orientation and gender identities. This is why we started writing and why we will continue to do so.

The Frustrating Disappearance of Mitrice Richardson